I just bought a Western Digital MyBook Home Edition as a backup hard drive. The drive itself is small, pleasing to the eye, and not too noisy. It comes with WD Anywhere Backup, which itself is a rebranding of Memeo LifeAgent AutoBackup (I assume the standard edition). This software is supposed to automatically back up your files as they are changed on your hard drive.

I set the software to backup my WHOLE drive (from the C: directory down, with no exclusions). That's about 208GB of data. I've left it running overnight and over a day at work, and this is the progress so far. 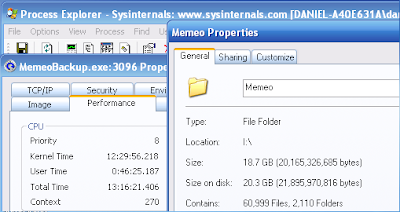 (I didn't take a snapshot of the other screen, which indicates that this process was started at 12:32 am, so it's actually been running for about 19.5 hours at this point, though it apparently was idle for a while)

To be fair, it is verifying the contents of all of the backed-up files as it goes. I do appreciate that. But seriously!

To ensure that it wasn't a problem with the drive, I copied my 1.3GB Guild Wars data file (a single file) to the drive. That took 1'09". I copied my nearly 8GB Unreal Tournament 3 install to the drive (1900 files exactly), and that took 10'21". Memeo copies files at 2% of the speed that Windows Explorer does. Another way to look at it is that Memeo is 50x slower than Windows Explorer.

I recommend that you don't buy Memeo software. They might eventually get it right, but you should wait until then. Western Digital should find a new company to provide their backup software - this Memeo junk just makes them look bad.
Posted by Dan at 2/14/2008 07:49:00 PM 47 comments:

I accidentally charged an old credit card on XBox Live tonight. I started looking around to figure out how to remove the old card. Half an hour later, I stumbled upon the solution. Since it's so obtuse, I will describe it here.

Notes: You must have a Windows Live ID associated with your XBox account, and you must have another credit card tied to your XBox Live account. You will be transferring all charges FROM one card TO another card. This apparently also has the side effect of "removing" the old card from the system. If you need to do something different, like to cancel XBox Live, you might need to call support instead.

I could make jokes about how Microsoft is just looking for an excuse to keep your money. Instead, I'll joke that they can't design user interfaces. I mean, it's not like anybody else has solved the cancel-a-credit-card interface problem.

Oh wait. This is from the iTunes music store:

Of course, this should be no surprise to any 360 owner. The 360's interface is among the worst things ever created by Redmond. Yes, I think it's worse than Clippy. Quickly - where do you go to get a list of your active downloads? If you're in a game, the only way is by pressing the "XBox" button, and selecting PERSONAL SETTINGS! Clearly, downloads are a setting. There are a number of settings which you change in 2 different places. Themes are one example. Also, the 360 is the only console whose menus are affected by the speed of your internet connection. Quite often, I can't start a game for 30 seconds or more because the menus haven't yet loaded (presumably, downloading ads off the XBox servers).

It's worth noting that the XBox 360 has been out for OVER 2 YEARS! The original XBox was only around for 4 years before the 360 was introduced. This console is half dead, and the user interface is only beta quality. Nice play, Microsoft.

I noticed that Microsoft added an item to their help center in the XBox interface. You can instead go to xbox.com/accounts to manage your credit cards. The interface is a little nicer, though they still dump you back to the old system to transfer your XBox Live subscription from one card to another.